This Halloween Thing Is Making Me Green...

Posted by AquarianM at 12:39 AM No comments:

So there's a little bit of Foo poetry I spotted on the web:

I look up at the night,
Always searching.

I'll never believe in that splendor being empty.

I want to believe. 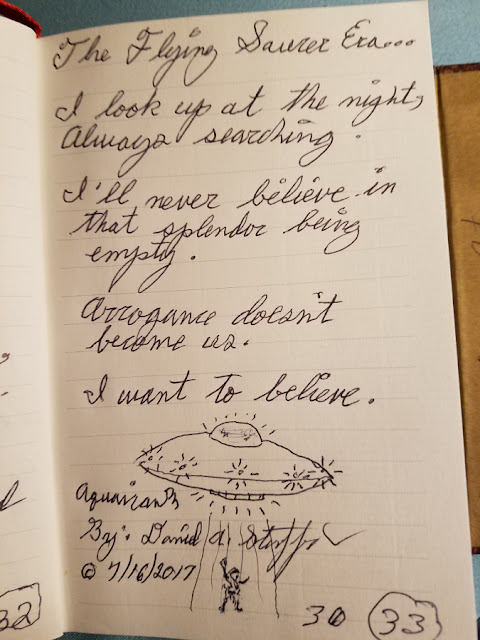 Posted by AquarianM at 12:46 AM No comments:

The Adopted Interstellar Sport Of The Palien Green Federation... 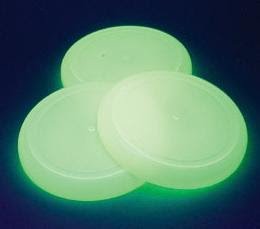 Well, actually, we have two sports we learned from you, Earthlings. Well, that and the whole concept of "sports" to begin with. No other species in the known galaxy has thought of so many ways to play with balls or knock them about.

The first sport we picked up from you is Frisbee. The second is disc golf.

We're not sure, but we think that Earthlings playing with flying saucers may be subconsciously related to abduction experiences. I guess it depends on how deeply the inventors were probed.

There's a new one few have heard of yet called "bucket disc." We're still waiting for that one to take off.

Meanwhile, we use the other two sports as drivers' ed simulators for baby Paliens!

Posted by AquarianM at 2:39 PM No comments: 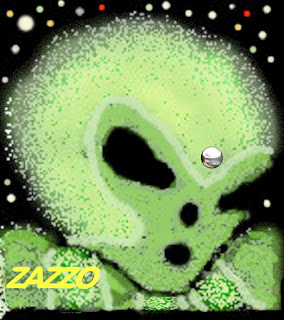 Hello, Earthlings! My name is Zazzo.

I and my crew arrived in Earth orbit about 65 million years ago. We got stuck here after a particularly nasty solar eruption wiped out all the artificial intelligence systems on our mothership. You know it as The Moon!

The dinosaurs very much regretted it, because it was the last thing they saw as the comet we were dodging smacked into the Yucatan and wiped them right the heck out!

Ever since, we have been working like crazy to raise the intelligence level of life on Earth. Let me tell you, it hasn't been easy! All the dinosaurs were gone, leaving only small birds. Most fish were gone. The smartest thing we could find left alive on Earth were these little rodent-like proto-primates. Let's see YOU try to genetically engineer the equivalent of a squirrel into intelligent life! Good luck with that, and you're welcome!

We've had some smaller computers and our foo fighters survive the Dinoclysm. The foo fighters are limited to travel within the solar system, however. (It would take us a little over four years to get to the nearest star system - Alpha Centauri - if they carried enough fuel to go that far!) We can cruise out into the cloud of dwarf planets and asteroids beyond Pluto, but that's about the limit.

We originally came from the Palien Green Federation in the nebula you see when looking at the constellation Orion. Our long-range communications are out. No talking to home for us. Sadly, we will not taste another Giant Palien Pistachio green brew for at least another few thousand solar years. (Yes, years are different lengths on each and every planet! Get with the time measurement police, Earthlings!)

Worse, an evil race of Reptiloid creatures have been flying in and messing with our genetic enhancement of humans every once in awhile. Where do you think George Bush, Dick Chaney, and the rest of the evil mean people get their genetic pollution from? The Reptiloids want humans to be stupid and mean - it makes it easier for them to feed their lava snarks your kibbles and bits. You don't want to know which bits, trust me.

The Reptiloids have nasty pets that evolved on hot worlds called Lava Snarks. They have rock-hard grey shells, are shaped like a wolf crossed with a dragon, and they have glowing red eyes. The snarks can see infra red (heat) light in fine detail. They have acidic venom that can be flammable in Earth's atmosphere. They have incredibly hard and sharp teeth and claws. The Reptiloids and their snarks like to live in deep tunnels under the surface of a planet. They sneak around in basements, sub-basements, caves, caverns, catacombs, and other deep, dark places. Their ships are mean-looking black triangles with red lights.

We Paliens like living on the far side of the Moon. It faces away from the Reptiloid-infested Earth, it has hangers for our foo fighters, and Palien Green food enough to last two billion years for the fifty of us Greens. (Except the GPP brew, drat it!) Plus it's ours, and it's what we came here in. Our foo fighters are silvery-metallic. You call them "flying saucers." You stole one from us after it got hungry and landed hard in Roswell, NM in the 1940's. You also stole the dead bodies of the two jokers that didn't feed their foo. We want the foo back. You can keep the little green stiffs.

Life in the Orion Nebula was pretty cool, as long as you didn't run into any Reptiloid squadrons. We had all kinds of green food. (Why do you think we're green and not gray, Earthlings?) We had green drinks and we lived on planets near green stars. We think humor is in some ways better than logic, but we like logic too. (Bend your fingers a little, Mr. Spock! \\//_ ) We can do things with our minds, too. It's kind of like the Force in Star Wars. (Who needs hands, Luke? Just *think* it!)

Our green leaders sent us out here towards Earth to see how it was holding up over the past billion years. Everythiing was still pretty primitive back then. We'd seeded Earth with green life - plants...well, algae, really - about 3.5 billion years ago, but we were a bit more primitive back then, too. We goofed and got some animal cells in the mix. Worse, they had been contaminated by a Reptiloid stealth DNA bomb. How do you think you got the "Law of the Jungle" instead of the "Garden of Eden," Earthlings? The Devil rides in a black triangle.

At any rate, we're stuck here on Earth Now. No green cheese on the Moon. Drat it!

I need to get some maragaritas and zucchini for Drizzla or she is going to crash me in Area 51 - ! 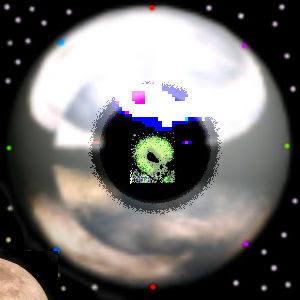 Posted by AquarianM at 2:07 AM No comments:

You know, when I look at Earth politics, especially the Presidential elections in the USA, I think to myself "At least the evil Reptiloids ARE green instead of chasing green."

Reptiloids are dark green, and are the dark overlords of of the Dark Geenalien Empire. They're not even funny like the Bright Green Alien Federation, or full of snarkasm like my own beloved Palien Green Federation back in the Orion Nebula.

Then I look at US politicians. None of them are green, but almost all of them are chasing green...as in greenbacks, bucks, yankee salad...cash, baby. They will eat each other faster than a Reptiloid will eat your young, Earthlings.

Well, except maybe Bernie Sanders. I think he could get a Reptiloid's pet lava snark to let it pet him, and even listen while he gave it a lecture on human-exobio relations and technology partnership treaties.

Then there is Donald Trump. He is basically orange, (probably from blood pressure & lack if heart) and already has a lot of green. I swear the guy must have 50 snarkasms a day. Trump could out-snarkasm most Pale Greens I know. Well, except maybe my beautiful Drizzla!

("Snarkasm": 1. A particularly witty sarcastic barb designed to make your political opposition look as idiotic as they obviously are. 2. Getting off on number 1.)

Then there is that whole "wall to keep the illegal aliens out" thing. What is he going to do to keep us or the Reptiloids out?  Build a Stephen King dome and hire the Butterfyd Kindred to maintain it? It's not like he doesn't hire people who aren't from the US, or marry them, for that matter.

You Earthlings sure are a strange bunch. You make pale green aliens look normal!

Posted by AquarianM at 2:49 AM No comments:

A Little Foo Fighter Cruise Around The Planet...

Ok, it's been waaaay too long since I got up into space to see the stars without having to duck Reptiloid ships. It's like being banned from cruising in town on weekends because it's always staked out.

Drizzla and I finally got a little quality time above the atmosphere the other day. My buddy Rizzoot got a good shot of my ship, "Foo For Yo Love" in flight. She's almost as nice to look at as Drizzla, but don't tell her I said so. 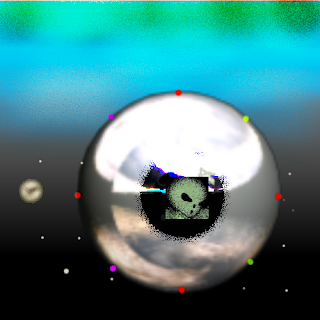 Posted by AquarianM at 3:36 AM No comments:

Posted by AquarianM at 12:01 AM No comments: 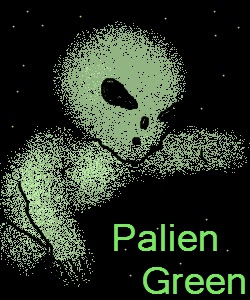 Click on the alien to send an interstellar message

Available books of poetry
by Daniel A. Stafford:

Poetry/photography of a beautiful place

13 poems all around life

At the edge of sand and surf

Ghosts of the Fall

54 poems of Halloween & the Fall season

15 poems to raise your energy level.

The above links are all to the e-book versions of these chapbooks.
For paperback versions and to view a listing of all my books as they are released click HERE: Dan Stafford's Poetic Universe